New York, February 26, 2015 – Capital committed to Latin America dedicated private equity and venture capital funds reached US$10.39b in 2014, exceeding the previous record of US$10.27b in 2011, according to data released today by the Latin American Private Equity and Venture Capital Association (LAVCA). In 2011, there were 35 fund closings as compared to 56 in 2014, and the five largest funds accounted for 81% of the total capital committed that year, as compared to only 58% in 2014.

“The uptick in 2014 fundraising was not only a return of the larger pan-regional and Brazilian players to the market, but was notably less concentrated than in 2011,” said Cate Ambrose, President of LAVCA. “What this tells us is that the universe of managers raising capital for Latin America continues to expand and that despite regional growth projections of under 2% for 2015, LP demand for exposure to the region remains strong.”

Brazil-focused funds captured US$5.56b through 23 partial or final closings in 2014, representing more than half of the regional total. Robust fundraising for Mexico-specific vehicles was driven by six new funds backed by the local pension funds, totaling US$1.33b, a 27% increase from the previous year.

Venture capital investors deployed US$525.6m through 186 transactions in Latin America during 2014. Early stage investments have been growing consistently since 2010, when just US$63m was deployed in venture deals, and activity in 2014 reflected an increase of 24% in capital invested and 56% in number of deals as compared to 2013.

Driven by increasing venture capital activity, Information Technology (IT) was the top sector in terms of number of deals and the second most important by amount invested. With US$1.14b, IT companies captured 14.5% of the investment totals through 154 deals. Healthcare represented US$798m across 21 transactions (10% of the total invested). Consumer/retail accounted for 23 transactions (US$502m) and continued to be relevant for middle-market investors, surpassed only by technology.

Eight large deals related to the generation and distribution of power totaling an aggregate US$1.64b made energy the top sector in terms of capital invested in 2014.

Mexico was the second most active market with US$1.31b being deployed, representing a 102% increase in dollar terms from 2013. Propelled by expectations of opportunities related to the country’s ambitious energy reform, two large oil and gas deals accounted for more than half the total amount invested.

“It is expected that the Mexican energy reform, along with the increasing demand for oil and gas infrastructure in Brazil and the Andean countries will continue to drive investments in this sector during 2015,” continued Ambrose.

In 2014, a total of US$4.64b in proceeds was generated through 60 partial or full exits in Latin America, representing a 24% increase in proceeds over the previous year. Sale to strategic acquirers was the dominant exit route in 2014, with 46 exits generating US$3.75b. International strategic acquirers were involved in 15 of these sales, with Latin American groups making up the balance.

The full report will be made available free to LAVCA Members in March. At that time, non-members will be able to purchase the report here. 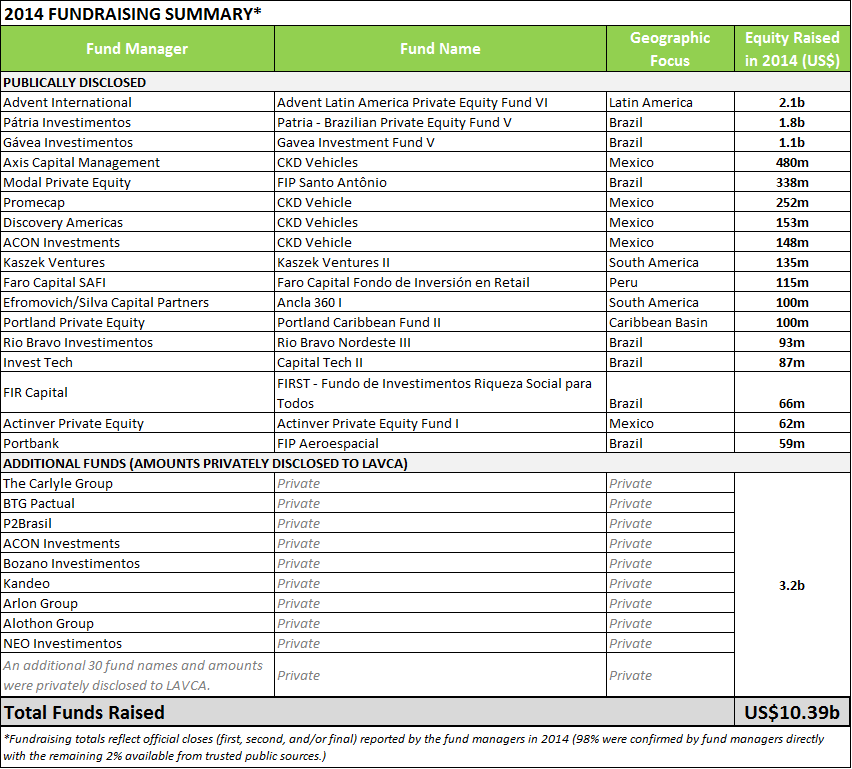 The 2015 LAVCA Industry Data & Analysis provides insight into the fundraising, investment, and exit activity among private equity funds investing in the Latin American region. LAVCA Industry Data is based on a confidential survey of fund managers and secondary sources, creating the first reliable source of data on private equity and venture capital in Latin America. LAVCA has conducted the Fund Manager Survey on PE/VC activity in Latin America since 2008. In this edition of the survey, LAVCA reached out to more than 250 fund management firms active in Latin America and the Caribbean. LAVCA collects most of the information directly from fund managers and amounts have been confirmed whenever possible through information provided by the fund managers themselves. This year, 92% of fundraising, investment, and exit transactions came from primary sources. Reported fundraising totals reflect only official closes (first, second, and/or final) confirmed by the fund managers or, if not obtained directly, reported in trusted public sources. Capital commitments accruing prior to or between official closes are not included. Captive funds or funds investing directly from its own internal sources (for instance, the balance sheet) are not included in this study. Infrastructure funds managed by private equity firms and making private equity-style investments are included in the analysis (e.g., equity investments in infrastructure-related industries). Infrastructure investments that fit the conventional model (e.g., Greenfield projects and/or project finance) are not included.

The Latin American Private Equity & Venture Capital Association (LAVCA) is a not-for-profit membership organization dedicated to supporting the growth of private equity and venture capital in Latin America. LAVCA’s membership is comprised of over 160 firms, from leading global investment firms active in the region to local fund managers from Mexico to Argentina. Member firms control assets in excess of US$60 billion, directed at capitalizing and growing Latin American businesses. For more information, visit www.lavca.org.