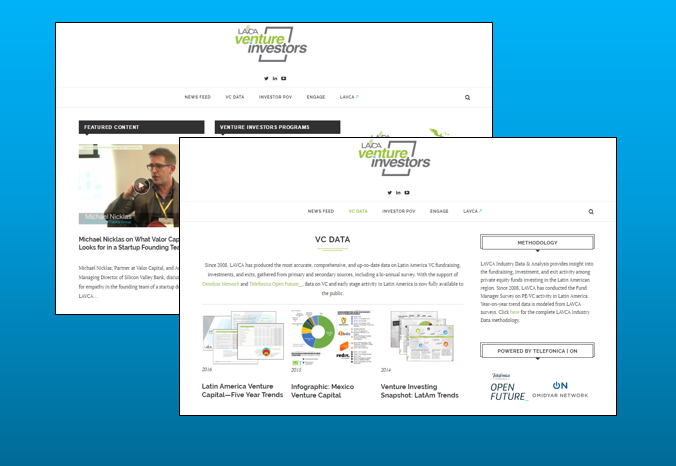 Venture investors have deployed over US$2.1b in Latin America since 2011, increasing deal activity year-on-year, according to LAVCA’s Latin America Venture Capital Five-Year Trends report. Even in the context of Brazil’s economic downturn, venture capital investors deployed record levels of capital in the country in 2015, with US$594m invested across 182 deals. Outside of Brazil, Mexico is the second most active VC market in Latin America, with US$260m deployed over the past five years; deal flow is up 6X (in US$) since 2011. There is new momentum around deals in Argentina, as well as ongoing activity in the Andean Region (Colombia, Peru, and Chile).

“In addition to the growing VC activity in Latin America, we have seen an uptick in international interest in local startups, an important indication of a maturing ecosystem,” said Cate Ambrose, President & Executive Director, LAVCA.

The LAVCA Venture Investors content platform is made possible with ongoing support from Telefonica Open Future_, and long-time partner the Omidyar Network.

“We are always looking for ways to support entrepreneurial talent and leverage our funds to turn innovative ideas into successful businesses,” said Javier Placer, CEO of Telefonica Open Future_. “Latin America continues to be an important and thriving early stage ecosystem and LAVCA is the perfect partner to engage that audience.”

Julie Ruvolo, Director of Venture Capital Strategy at LAVCA, joined from TechCrunch in early 2016 to spearhead the new platform.

“Given the momentum around venture investment in Latin America, and the fact that the digital population is set to double in the coming years, we wanted to create a dedicated platform to chart that growth trajectory,” said Ruvolo.

For regular updates on venture capital activity in Latin America and to access new content, sign up for LAVCA’s bi-weekly newsletter, the LatAm Venture Bulletin. View the latest issue.