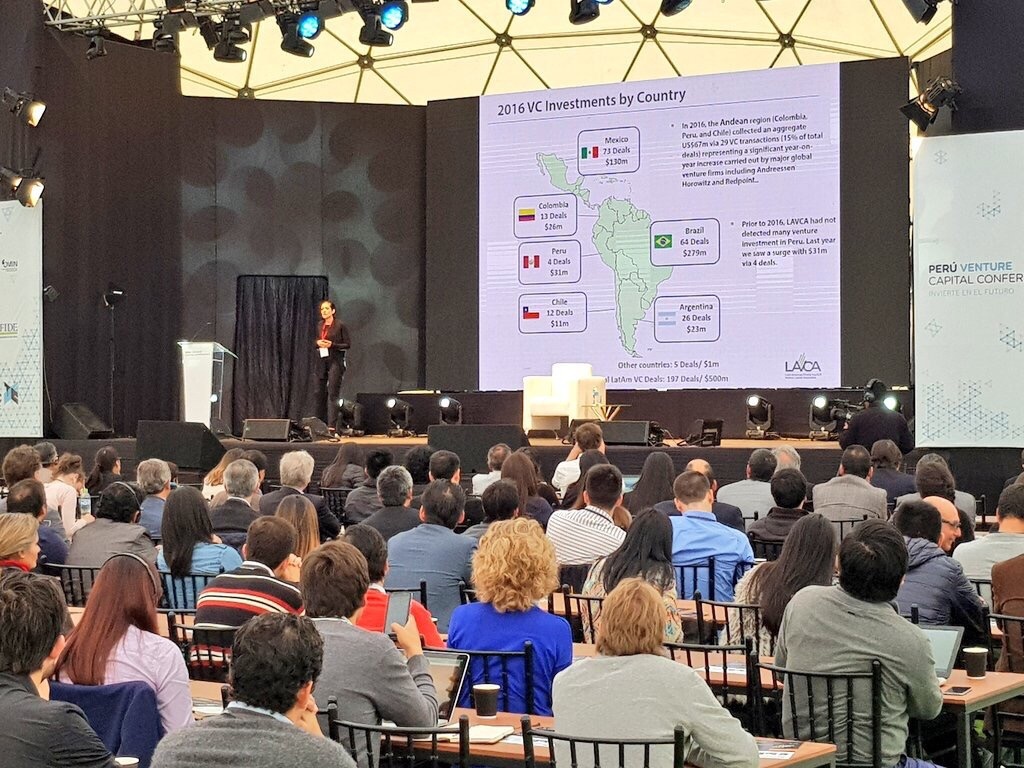 Despite its status as one of the fastest growing economies in the world, Peru has traditionally ranked lower than its Latin American counterparts in terms of the development of the venture capital ecosystem. In fact, until recently Peru had almost no country-dedicated VCs and between 2011-2015 consistently captured fewer venture investment dollars than Argentina, Brazil, Chile, Colombia, and Mexico, according to LAVCA Data.

However, players including Telefonica Open-Future-backed Wayra, Fledge, UTEC Ventures, Angel Ventures (which obtained FOMIN backing to launch a Pacific Alliance-focused fund), and others have become integral to the growth of the local ecosystem.

In 2016, LAVCA data showed that Peru saw US$31m distributed across venture capital deals. For the first time in five years, the country captured the highest amount of venture investment dollars for the Andean region and the third highest in Latin America (see 2017 Trend Watch: Latin American Venture Capital Infographic), however the number of deals remains low (4 deals in 2016, compared to 13 in Colombia and 12 in Chile during that period). Peru also saw some notable exits: Cinepapaya (acquired by Fandango) and Busportal.pe (acquired by Naspers-backed Redbus).

As a result, activity and excitement in the country is elevated and just last month, in June 2016, UTEC Ventures organized the Peru Venture Capital Conference with an impressive turnout.

600+ individuals, including active VCs such as Axon Partners, NXTP Labs, Velum Ventures, QED Investors, and Quona Capital were present in Lima. Keynote speakers like Paul Singh (Disruption Corporation), Chris Heivly  (Co-founder of MapQuest), Claire Delaunay (Founder of Otto, recently acquired by Uber), and Dave Blakley (Co-founder of Mach49) touched on everything from corporate innovation to building a startup community, all with the aim of jumpstarting the growth of the Peruvian ecosystem. Meanwhile startups in agtech, fintech, and other spaces showcased their businesses via live pitches and others like Joinnus shared their experiences raising capital regionally. LAVCA also shared key industry data trends on Peru and the region as a whole.

Engaging Key Players in Other Markets is Important

On the heels of Peru’s deals and exits in 2016, there is perhaps no better time to develop the country’s budding ecosystem. But to evolve, most players agree it will require an active role on the part of development finance institutions as well as support and engagement from other Latin American markets. For investors and industry organizations this could mean working to build a better pan-regional opportunity, including strengthening cross-border fundraising for the Andean region and breaking down barriers that restrict pan-regional VC fund investment; building bridges between various investor networks; and working to connect startups with non-traditional and smart sources of capital.

As Paul Singh alleged during his keynote,  “technology will be the fundamental driver of growth in Peru.” Despite increased investments in R&D and education, Peru’s level of technological readiness remains stagnant compared to other Latin American markets, according to the WEF’s Global Competitiveness report. While the Peruvian government has made strides to support ecosystem growth, such as bolstering support for StartUp Perú  which recently announced plans to invest in 350 local startups and passing legislation to support the creation of business development centers, there is much work to be done in the way of building local tech talent. With academic organizations like UTEC and coding schools like Laboratoria taking off to fill in the gap, Peru is working toward a more well rounded and sustainable future in tech.

LAVCA is seeing an important investment trend both in the Andean region and in the rest of Latin America: global VCs are teaming up with local investors to carry out deals in the region. Even co-investments between local investors are taking off, particularly in the fintech space, which was responsible for 63% the syndicate deals in Latin America in 2016. If this trend holds true, then we may start to see a strengthening of the local investment community, not just in terms of VC activity but perhaps between the country’s growing number of angel networks as well, such as the recently launched PECAP.

Being a Late Bloomer Has It’s Benefits

Gonzalo Villaran of Peru’s Ministerio de Produccion made a point that perhaps Peru’s former shortcomings are now it’s greatest assets. Peru is in a privileged position to start from 0, learning from the successes and failures of other ecosystems like Chile, Colombia, and others. In his own words:

In just about 3 years, we have gone from nothing to where we are now. Our rapid growth is because we’ve been late to market, we are learning from the experiences of other countries, both good and bad.

Time will ultimately tell if Peru will reach its potential and if 2017 will be the year that marks a turning point for the local venture ecosystem. In the meantime, for more information on Peru VC: